Hey everyone! I’m working on sewing a little felt stuffed sloth brooch. I’ve got my little eye patches on and my nose. When I visited the Sizzix booth at Creativation, they gave me this cute kit to sew a stuffed felt sloth brooch. It’s sooo adorable. Join me while I work on my sloth and tell you some of what I learned about Sizzix. This is the die that’s used to cut out the sloth pieces.

Creativation is this huge trade show for all the different crafts. Towards the last day I was starting to look at stuff that I wasn’t quite so familiar with. There was a ton of scrapbooking stuff there, and I haven’t done that much scrapbooking. I was talking to someone and I said, “I’m interested in learning a little bit more about that”. She told me to go over to the Sizzix booth. Sizzix is a company that’s been around for a very long time, they’re well respected, and they could give me the low down.

I went over to the Sizzix booth. There was this really sweet woman doing makes and takes of little sloth felt brooches. She gave me all the stuff to make it to go. It was towards the end of the show, so we didn’t really have time for me to sit and do it there.

If you’ve heard of Sizzix, it’s probably been about their paper cutting. They make these machines with dies and you put down the die, you put down your paper on top of it, you put down something like a plastic board on top of that, and you just can’t crank it through the machine. It die cuts out the paper shapes for you, which is super, super cool when you’re doing paper projects. What she showed me at the booth is these bigz dies not only can cut through paper, they can cut through fabric. 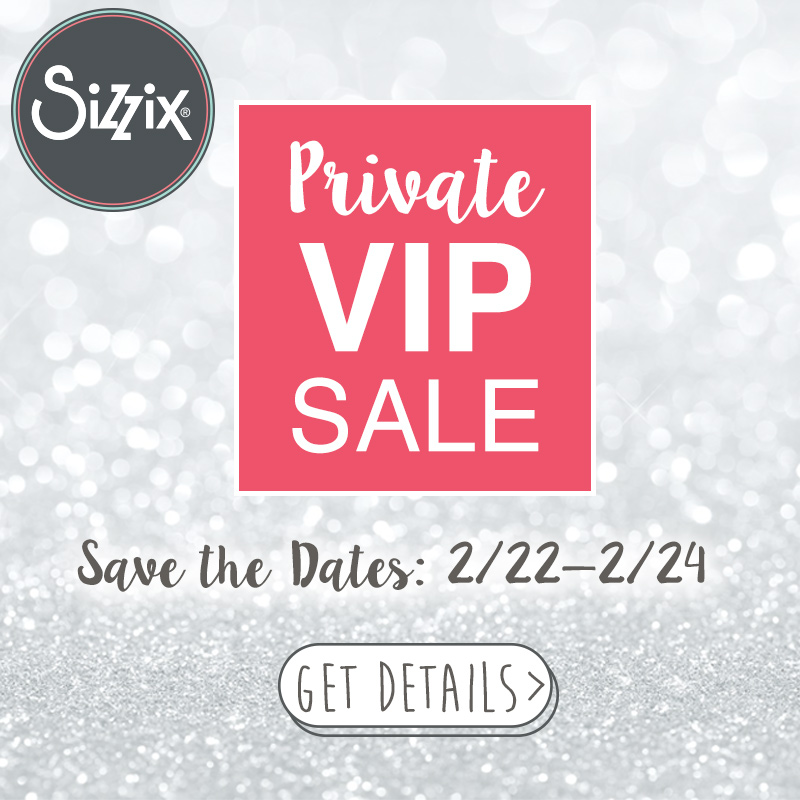 She cut all the felt pieces for this slothusing the Sizzix machine. It’s not a whole computer software complicated thing. It’s just sandwich the stuff together, roll it through, and you’re done. I thought it was so cool that the pieces were just so easy to cut out with the machine.

In addition to being fun, this is really great if you want to do a craft for a group. I’ve done kids crafts before. You could do a sloth like this with kids. If you didn’t want them sewing with the needle because they are little, they could use fabric glue to stick it on. The main thing that ketp me from doing projects like this at like my kids birthday party is the thought of having to cut out by hand 14 sets of eye patches and 14 noses or something like that. It would take forever. But with the Sizzix machine, you could do it in 20 minutes, if that.

At the booth, I saw some of the other dies they have. So in addition to the sloth, Sizzix has things like a narwhal and a sea turtle. 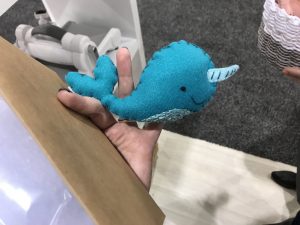 I was so impressed by a fabric doll. All the pieces for the fabric doll were cut out using a Sizzix die. That was just the most amazing thing to me. 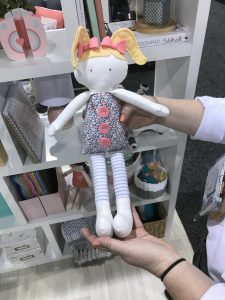 The other thing I was thinking of is themed birthday parties. Sizzix would make it so easy.
I could cut out the felt pieces for the project but then I could cut out like paper versions to make little place cards. Sizzix dies aren’t just for paper or for fabric. It’s one die will cut through any of that.

That would just be adorable to have everything coordinate at a party. If you’ve ever gone down the Pinterest hole, they have these like massively adorable cute coordinating things. It can take you forever and ever and ever to try and find all that stuff that coordinates for a party or for a room décor. But if you have the Sizzix die, then you can do all of that with the one die, and you can get like all the coordinating parts together quickly. 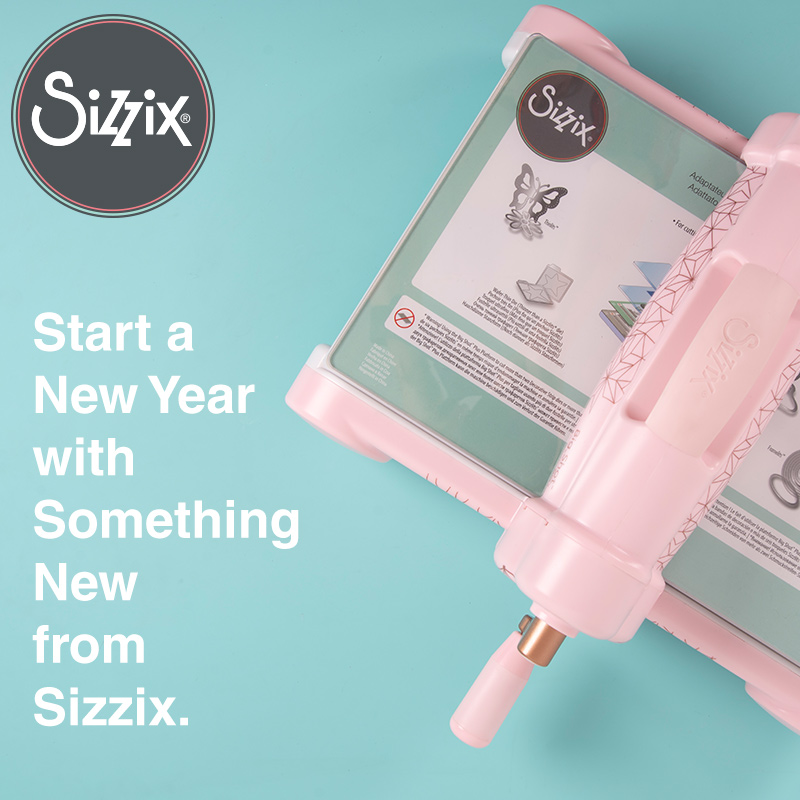 People ask me why I don’t do more of sewing. There are two reasons. One, is I prefer hand sewing. I cannot crash on the couch with a sewing machine. I can crash on the couch with a crochet hook. But the other thing is, I’m gonna be honest, I hate cutting out the fabric. It’s always takes forever. That’s not the fun part I want to be doing. But this was so cool because, with the Sizzix, cutting out the pieces took a minute. Then I could get to the sewing. Using the little hand crank machine makes cutting out the pieces a lot more fun than trying to get the detailed shapes with scissors.

So yeah, if you’re looking for something fun and neat, check out Sizzix. If you want to see some other neat crafty stuff including a lot of crocheting knitting stuff, then make sure to subscribe to my YouTube channel.

It’s time for the Flamies

Photos of My Favorite Things