Since I’m going to be mentioning the fact I have carpal tunnel syndrome, I thought it would be a good idea to give a little background on my experience with carpal tunnel.

I’ve always known that I was at risk for developing carpal tunnel syndrome. I was (and am) the poster child for repetitive hand movements. My typical day would involve 4-5 hours at a computer and 3 hours of crochet or knitting. So I knew it wouldn’t be a matter of “if” I developed carpal tunnel problems, but “when.”

Still, it hit me out of the blue. This past August (2016), I was on a family vacation when it started. Friday night I noticed a sharp pain when I would flex my hand back to move the blanket. Saturday I realized I had the same pain when holding open the hotel room door. By Sunday, my fingers were numb, tingling, and swollen. My husband insisted I go to an urgent care clinic, where I was diagnosed with carpal tunnel syndrome. They gave me wrist braces, told me to take ibuprofen to help with the pain and swelling, and said to follow up with an orthopedist once I got home. 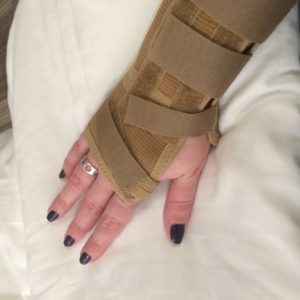 In the beginning…with the wrist splints.

Where I live, it takes a good 3 weeks to get an appointment with an orthopedist. In the meantime, I saw my general practitioner, who advised me to basically not do anything with my hands until I saw the orthopedist. My life came to a screeching halt. On doctor’s orders, I did nothing, or as close to nothing as I could get away with. I installed Dragon on my computer so I could dictate emails, my daughter chopped all the vegetables for supper each night, and I drastically cut back on all the work that I could.

As physically difficult as it was (my hands hurt even when I did nothing), the psychological toll was worse. To really understand my experience, you need to understand something about me. There is a joy in making things, in the act of creating, and that’s my drug of choice. I love crafting with a capital L-O-V-E. The running joke around the house is that I can’t just sit and watch an episode of a television show; I have to be crocheting or knitting or hand sewing or doing something else at the same time. Now, though, everything I enjoyed had been taken from me. I couldn’t knit or crochet or sew. The spinning wheel I had been gifted sat in the corner unused. I couldn’t even read for long because holding the book open hurt. It’s hard to put into words the all-encompassing frustration that I felt. I wanted to do everything and I could do nothing. I was used to journaling out my thoughts at the end of the day, but even holding a pen and writing more than a few words was too painful.

Of course, there was also the guilt. I felt guilty that I could stop doing everything. I was able to basically take off from work and not worry about having a roof over our heads or food on our plates. I am so blessed, and this reminded me of how many people don’t have the “luxury” of following a doctor’s advice. That also makes me angry, but that’s a post for another time.

When I finally got to the orthopedist, he gave me steroid shots in my wrists. (I feel compelled to point out the irony in having to fill out 4 pages of paperwork on my first visit. If I could write that much comfortably, I wouldn’t have been there.) The shots resulted in the most wonderful 3 weeks of almost being back to normal. But then they wore off. He had warned me they only seem to help 20% of people in the long term. I guess I just wasn’t one of them. The pain came back. Since I consider surgery to be a last resort, I opted to try physical therapy. 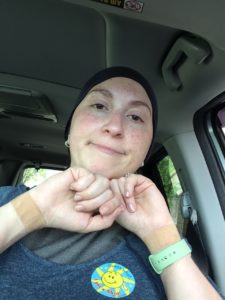 Right after the steroid shots.

My physical therapist has helped me to realize how my posture was affecting my arms and wrists. These twice a week therapy visits have slowly gotten me back to the point where I can do almost as much as I used to. It’s not exactly the same as before. I can feel it in my fingers when I’ve been knitting or cooking or doing things for just a bit too long. But therapy’s allowing me to live my life. I’m finding a new normal that I can live with, and maybe, just maybe, thrive with.

WIP Wednesday and the Design Process

Great Gifts for Knitters and Crocheters