I knit, crochet, sew, and embroider. Most people would categorize these crafts as traditional, domestic, and feminine, and your general assumption (no matter how enlightened you are) is probably going to be that someone engaging in these projects is female. When I advertised knitting classes for kids lately, a couple of people asked me if boys were allowed to attend. No one thought to ask me if it was for girls; that was a given. Major industry studies on consumer trends in needlearts make sure to cover the demographics of age and regional location, but don’t even bother with gender. It’s just assumed that they’re women.

Need further proof that knit and crochet are still considered effeminate? A Yahoo search for “what percent of crocheters are men” turned up a cringe worthy first page of search results including articles on the percentage of gay men in America and a Wikipedia article on the demographics of sexual orientation. Seriously, Yahoo? Ug. Stereotypes are alive and well in America.

Many people know at least one male crocheter or knitter- one knitting student gets help from her father who learned when he was little, and the Rabbi who performed my baby naming is an avid crocheter. Despite the male stitchers we know though, that does tend to be more the exception than the rule. And, for what it’s worth, this stereotype is at least lightly rooted in fact. A majority of needlearts consumers are female.* 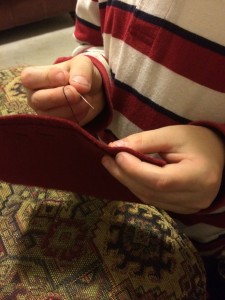 My little man learns to sew.

My house is full of yarn and fabric and all the notions needed for these crafts. Watching me stitch has inspired my son to do so also. He’s asked me to teach him to crochet and knit. He’s great at a chain stitch. With the proliferation of fabric coming into the house, he’s started some basic sewing, and is begging me for fabric and sewing supplies of his own. (That’s going to be his Chanukah present. Shhhh. It’s a surprise.)

I’d be lying if I said he hasn’t picked up on the gender bias in crafting. He asked me once, in his plaintive little voice, if it was true that yarn was for boys too. “Yes,” I replied, my heart breaking a little, “of course it is.” I wanted to warn him. I wanted to tell him that yarn is for everyone but that there are some hard headed people out there who don’t understand that. They might make fun of him. I wanted to prepare him for the gender politics that surround traditional crafts. But he’s too little to understand the complexity of the situation, so I didn’t. Instead I’ll just continue to help him to craft. He’ll learn from me, not that stitching is for women, but that stitching is something we can do together as part of quality time in a loving family. That’s a stereotype I’d be fine with.

*What’s a majority? 2 hours this morning on at least seven major industry websites fails to find me the numbers. Ravelry currently has over 70% female members, while The Knitting Guild of America is at 99%

Poll: What do you want to read here?

3 Crochet and Knit Ideas for December