Season 4 of of the Emmy nominated Knit and Crochet Now! is on the air. 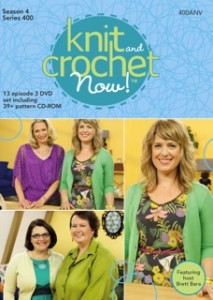 Robyn was one of the first professional crochet designers I met. I had the opportunity to sit in on a pull out session she led on crochet design, and she was truly inspirational.

When did you first learn to crochet?
I learned how to crochet about 10 years ago when I was watching my newborn niece. While she slept I learned a new craft.

What are the benefits of a television show like Knit and Crochet Now for crocheters?
I think knit and crochet now and other TV shows like it are fantastic for all crafters. They break down projects to show you they are really not as hard as you think they might be. Sometimes all you need is just one tiny details shown to you and then you are ready to roll.

Do you have a favorite project from all this season’s episodes?
My favorite projects from the show are always ones where I learn something as well.  I get extra excited to show everyone something new. I also love demonstrating any project from Doris Chan or Tammy Hildebrand since they are a joy to read as well as crochet. The hardest part is only picking which one or two cool things on each project I will highlight, since I usually can come up with 6 or 7

Did you learn something new while filming this season?
This season I had fun playing with the knitting looms. I’m a gadget queen I’ll fall for anything that’s a gadget.

News and a Giveaway with Stephannie Tallent