If you’ve been reading my blog for a while, you’ve read about how I never, ever, ever make gifts for people. Ever. I just don’t do it. Well, this year I caved and decided to knit and crochet some gifts. So far, it’s been a mild disaster.

First, I decided to knit my mother-in-law a scarf. Why did I decide this? I’m still not sure. Part of me knew how incredibly touched she would be by a hand knit scarf, even if it was just garter stitch. I think the rest of me was just looking for an excuse to buy yarn. Whatever my inner motivations, I picked up a lovely skein of alpaca in her favorite color (navy blue). 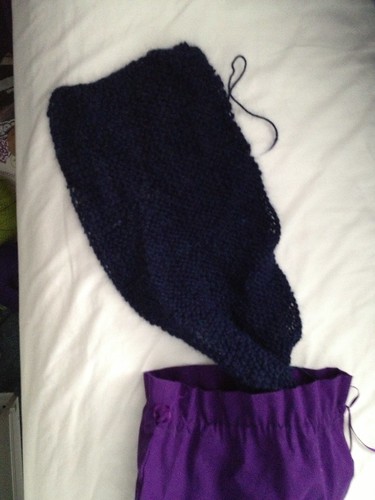 It’s ok. I don’t mind turning into a smurf.

For Thanksgiving, we drove down to visit my mother-in-law and brother-in-law. 14 hours in a car in one day. That’s plenty of time to knit a scarf, right? Um…apparently not. I don’t know if I’m just too slow, or if I took too many breaks, but I wound up with only half a scarf done. Oh, and the yarn dyed my fingers blue.

Twitter conversations since then have revealed that this can be a problem with blue yarns in particular. A vinegar bath should solve the problem, but I’m NOT going to rip out all my work to put the yarn in the vinegar bath. I think I’ll finish the scarf first, and then do the vinegar thing. So I currently have only half a scarf made for her.

This wouldn’t  be so bad except for the…um…collateral damage.

I bought my brother-in-law a coffee mug. I even packed it with the stuff we took with us for Thanksgiving. But I couldn’t give him a mug and her nothing (since the surprise scarf isn’t finished), so the mug came right back with us. It’s still in the back of my van.

The idea of the scarf also made me feel guilty for not making my mother something. So, she and I talked and decided that she would like some crocheted pot holders and mug rugs. Would you like to see how far I’ve gotten on those? 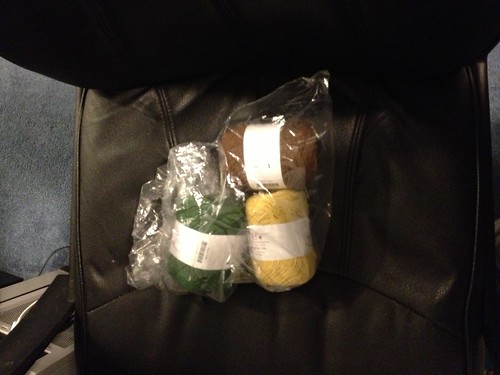 Yup. I bought the yarn. That’s it so far. Not a single stitch actually made. She’s not coming to visit till mid-month so I still have time. Kind of.

How is your holiday stitching going? Are you coasting to a finish or ready to swear “never again”?

You Can Make This Spring Sale

When I Don’t Crochet or Knit…