I’ve been spending a good bit of time lately working on crochet stitch diagrams and knitting symbol charts. I’m a big fan of both as I’m a visual person- most of the notes I take when making a project are symbol diagrams and charts.

I’ve seen it written that crochet stitch diagrams show what the project looks like from the right side as well. But, that’s not exactly true. Where this goes wrong is with post stitches. 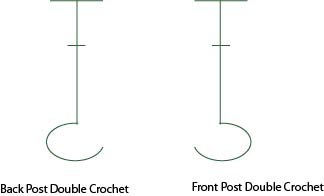 Do you have any questions about crochet diagrams or knit charts? What do you think of these methods of showing pattern stitches.