At TNNA the folks at the Dark Horse Knits booth were giving out skeins of yarn in slurpee cups along with a pair of knitting needles. The knitting needles were sticking up out of the top like a straw would from a drink. It was very cute. Anyways, on the way home, I was looking it over, and I thought it would be just the thing for trying to teach my daughter how to knit. I’m sharing what I did in the hopes it’ll give you some ideas about ways to teach youngsters to knit.

First, I cast on some stitches and knit a row. This way we would have something to hold onto.

Second, I positioned my daughter’s hands on the needles and held her hands in mine. Then I knit a row while holding her hands. This let her see what was happening and get used to the hand movements that would be required.

Next, I let her knit a couple of rows on her own while I held the yarn. (I was teaching her continental style.) There’s a lot to handle when knitting, and I wanted her to get used to the knit stitch without having to worry about tensioning the yarn. I had to help her occasionally to keep loops from sliding off, but she got the hang of it.

Finally, she knit a row on her own, holding both needles and the tension yarn. I’m a very proud mommy. 🙂 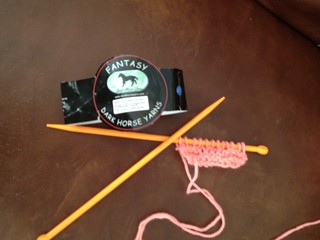 How to Build an Anywhere Crochet Kit

5 Basic Crochet Stitches and their Abbreviations

Things You Buy When You’re Serious About Yarn