Well, I finally did it. I finally bought a reusable canvas bag with the Target logo on it. 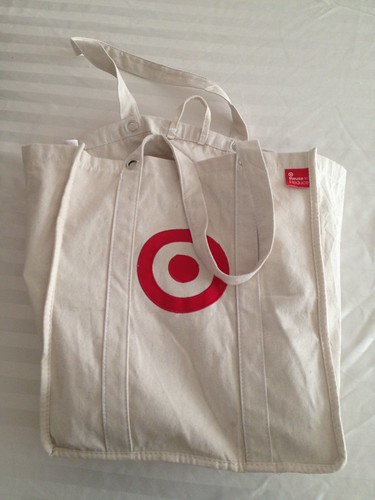 Over a year ago I first saw these bags in my Target store. I immediately wanted one. Canvas reusable bags are great and they can be laundered when sticky stuff spills on them. The bag was priced at $4.99. I can easily make a $5 impulse buy, but for some reason, this time, I didn’t. It was five dollars, and I already had a bunch of reusable bags at home. I wanted it, but I didn’t need it.

Then, for Earth Day 2011, Target had an special arrangement. You could mail in 3 of the plastic bags you received from shopping there and receive a coupon for $1 off a reusable shopping bag. I immediately sent in my plastic bags and was thrilled when my coupon arrived. That $1 off would allow me to assuage my guilt about spending money on something I didn’t really need. I hurried off to the Target store only to discover that they were completely out of the canvas bags. I was devastated.

Well, this Monday, I was walking through Target and saw that they had finally, over a year later, restocked the canvas reusable bags. I was immediately struck by the same feelings as before- an intense desire to purchase one and the knowledge that I really didn’t need to. Finally, I decided that if I still wanted something a year after putting off the impulse buy, I could buy it. So now I have my bag, and I feel no guilt.

Have you ever put off an impulse buy for a while? Did you decide to get it next time or resist the temptation? Am I the only one who puts so much thought into $5?

I Will Buy Yarn from Her