Today I’m putting out the pattern for Rue’s Song, a knitted cowl. You can see the details and specifications here. It’s inspired by the book The Hunger Games, so I wanted to take today’s blog post to explain a bit about that inspiration. 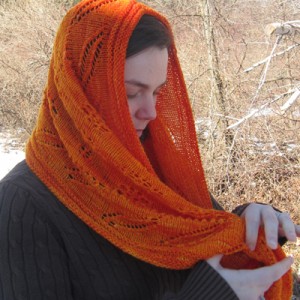 The Hunger Games is a book based in a fictional country called Panem. Panem is comprised of the Capital and 12 districts. As punishment for a failed uprising, each of the districts is required to send a boy and girl “tribute” each year to compete in the Hunger Games – an elaborate fight to the death for the Capital’s entertainment. The main character in The Hunger Games is a girl named Katniss. She becomes the girl tribute for district 12. Rue is a little 12 year old girl who is the female tribute for district 11.

The name of the cowl is Rue’s Song. Really, I meant it to refer to two different songs. The first is the 4 note tune that Rue would sing back home to mark the end of the work day. (Hence the cowl’s 4 motifs- leaves and 3 types of flowers.) This song would come, in the second book, to signal both thanks and rebellion. The second song is the lullaby that Katniss sings to Rue as she dies. It speaks of a meadow and a place were “your dreams are sweet and tomorrow brings them true”. Katniss sings Rue this song and then covers her body with flowers. The flowers are Katniss’ attempt to make Rue more than just a piece in the Capital’s games.

Rue’s death is a turning point for Katniss. Prior to this, she has dismissed comments by others when they rage against the Capital. But this point, Rue’s death, is when she finally allows herself to feel her own anger and resentment at the circumstances the corrupt government has put her in.

I meant for this knitting project to represent both the possibility of beauty in grief and the courage and strength to change one’s circumstances.

Handwash Only Projects and Your Family: A Guide

In Defense of Chivalry