5 Things You Should Know About Crochet Hook Sizes 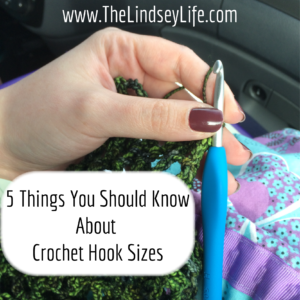 Letters are for the US only
The letter designations you may see on crochet hooks (D, E, F, H, etc) are only used in the United States. Crochet hooks from other countries aren’t labeled that way.

The mysterious number 7
In addition to letter designations for crochet hooks, number designations can be used. So an H hook is often referred to as an 8. A G hook is often referred to as a 6. But between a G/6 and H/8 is the mysterious size 7 hook. Why doesn’t it have a letter designation? I’m sure there is some perfectly valid historical reason, but I prefer to think of it as just some other wacky way the universe makes life more interesting.

Millimeters are best…
The most accurate way of designating hook size is using millimeters. So an H hook is 5.0 mm and a G hook is 4.0 mm and a 7 hook is 4.5 mm. If you are going to choose just one method for picking hook size use millimeters. This is especially helpful size many companies will use the same letter designation for different sizes. I have two F crochet hooks from the same company. One F hook is marked as 3.5 mm, and the other is marked as 4.0 mm. I never would have noticed the size difference if I had only looked at the letter designations.

…Except when they’re not
A millimeter should be the same the world around, but every manufacturer’s equipment differs slightly. So my 1 mm crochet hook from one company is actually smaller than my .9 mm crochet hook from a different company. Yes, the .9 mm should be smaller, but it’s not. Frustrating, ain’t it?

So, don’t change hooks
So what’s the big lesson here? Don’t change hooks in the middle of the project (unless it’s called for, of course). There is so much variation between companies and even within companies. Pick one hook to use for your project (and guage swatch), and stick with it.

Murphy’s Law for Knitters and Crocheters